The principles of collaboration, democratic communication, and creativity are not new. Common sense should tell you that they form the foundations of progress and problem solving in virtually every context. But in many school settings, these concepts often risk being buried under old habits, top-down management, and red tape.

On March 7, 2015, Habi was tapped by the Southeast Asia Interdisciplinary Development Institute (SAIDI) to hold a workshop with a select group of teachers and school leaders from various institutions. The two-day forum was as introduction to Habi’s customized approach to educational reform: imparting the mindsets of design thinking and deeper learning, a means of delving into existing problems before looking into sustainable solutions.

The workshop began with the first of Habi’s four-step process, “Himayin ang mga Problema,” which centers on the elements essential to uncovering and understanding problems. After pairing off on “first dates” as an exercise in research, participants moved on to a group discussion on when learning is most powerful and what makes it so—to which they answered, “when it is shared,” “when it is experienced,” and “when it shakes the soul.”

In the same segment, participants were also made to take a step back and reflect on their individual circumstances as educators. When deeper learning is employed, students are not only eager to acquire more knowledge, they are also motivated and challenged to apply it in other respects. With this in mind, the participants honestly assessed their students’ attitude towards school—Were they discouraged or challenged? Ambitious or mediocre?—as well as what kind of educators they thought themselves to be—critical or encouraging? It’s only when you comprehend your context that you can claim to understand your problems. 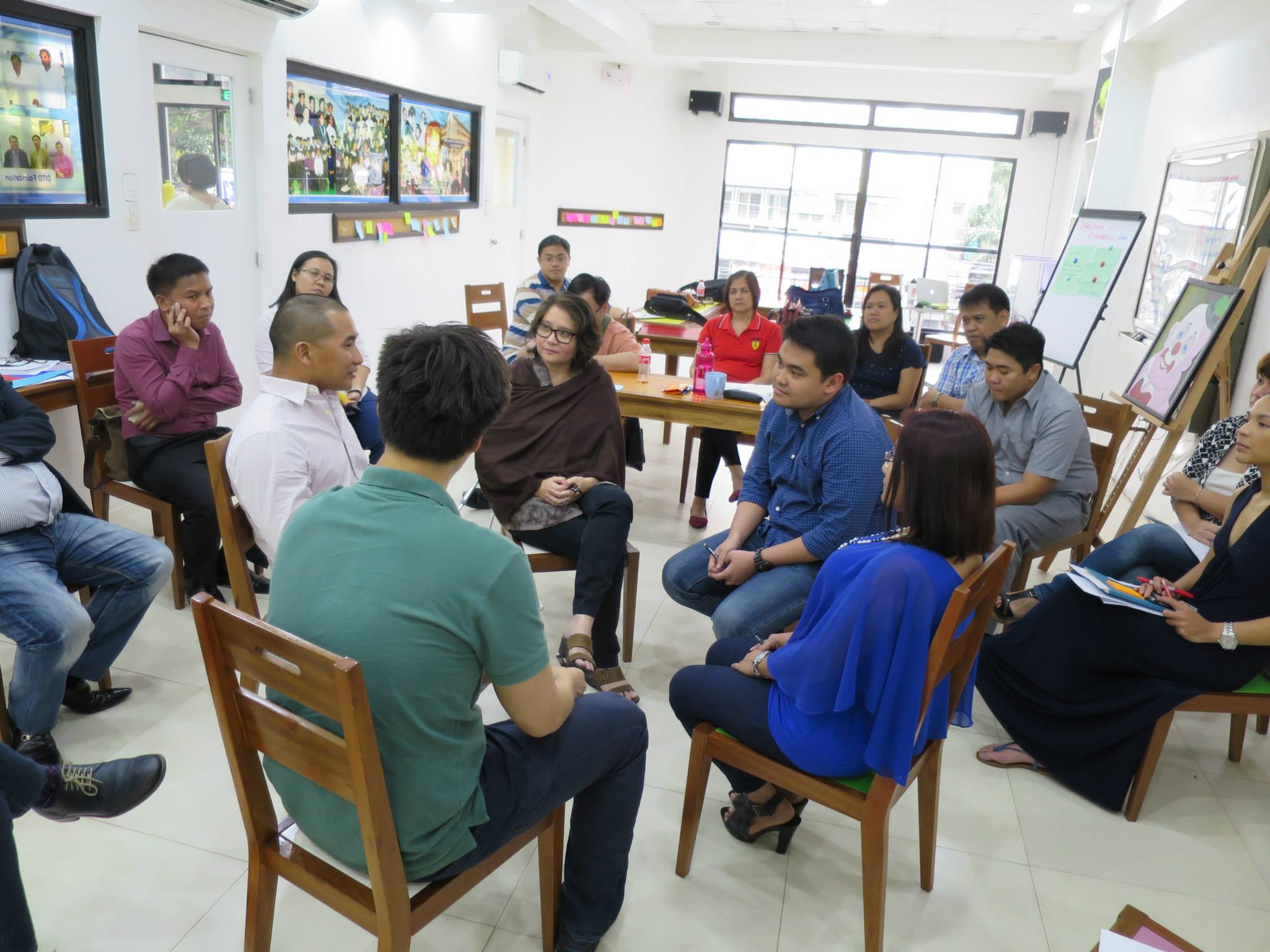 Participants engaged in a Fishbowl discussion

The following day, the workshop proceeded with “Ambagan ng mga Ideya,” as much a lesson on idea generation as it was on open-minded collaboration. Everyone has the capacity for good ideas, but there is no one person who will come up with all of them alone. Participants started with an individual brainstorming session, thinking up body parts that begin with S as well as excuses teachers give for being late or absent (the latter yielding many more results).

As a contrasting exercise, they then came up with at least 10 ideas to address topics ranging from teachers’ attitudes to implementation problems in schools. The only constraint was “quantity now, quality later.” It’s easy to shut down ideas as soon as they arise—too expensive, too time-consuming, too much trouble—but the best ideas are often born of democratic and nonjudgmental environments were suggestions can be aired before they are critiqued. Only after the idea generation portion were the participants asked to review the suggestions and pick out the ones they favored. 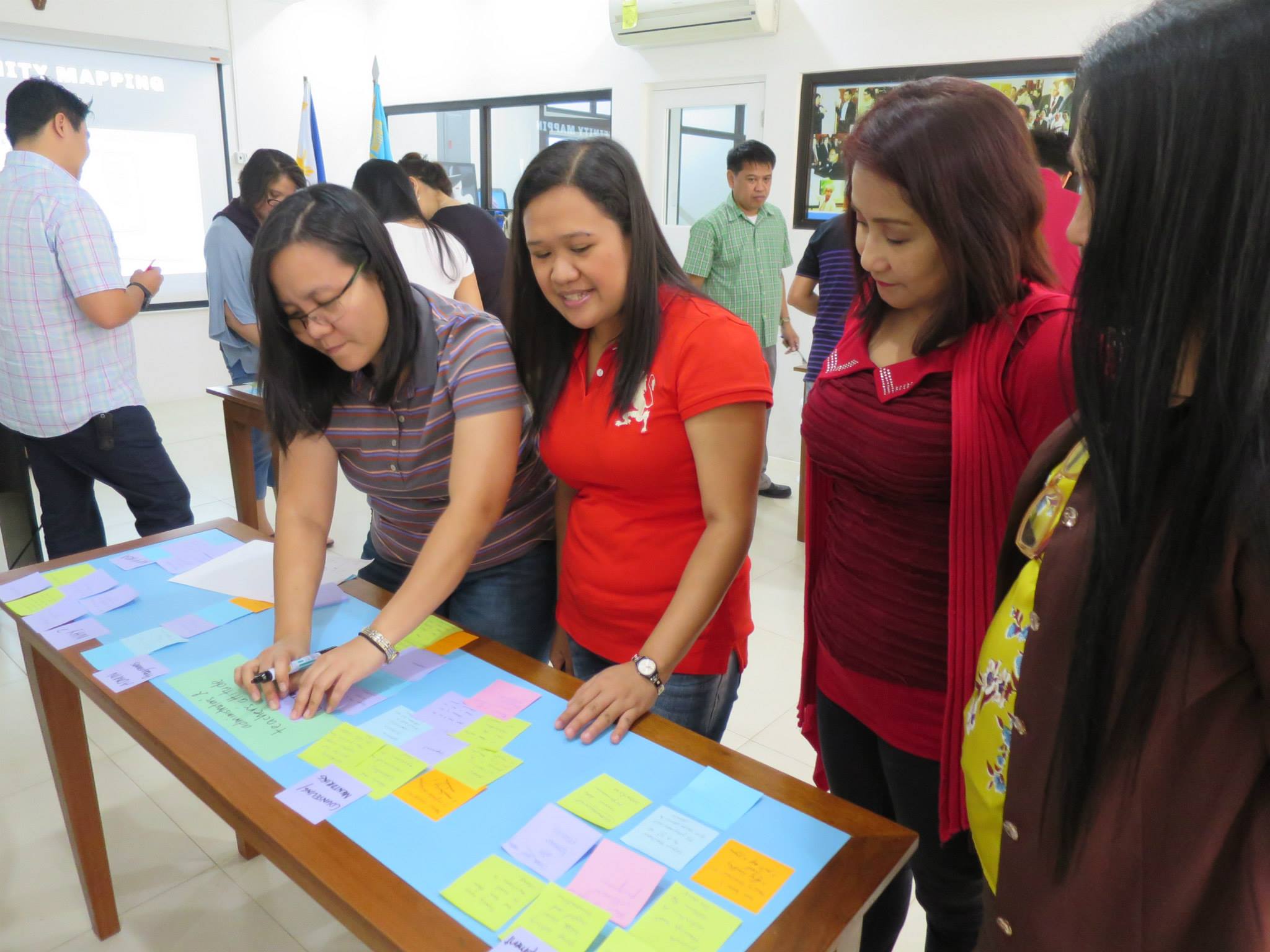 No one can say “NO!” during open brainstorm sessions

Then, by way of a challenge that involved building the tallest uncooked spaghetti tower that could still bear the weight a marshmallow, Habi introduced its third segment, “Bumuo ng Prototype.” Participants were grouped together and given time to formulate novel models in response to three among many of contemporary education’s most debated subjects. They would then proceed to the last segment, “Ipakita, suriin, at ayusin,” where each group would present their ideas while the rest—role playing as either teachers or administrators—asked questions and offered feedback. 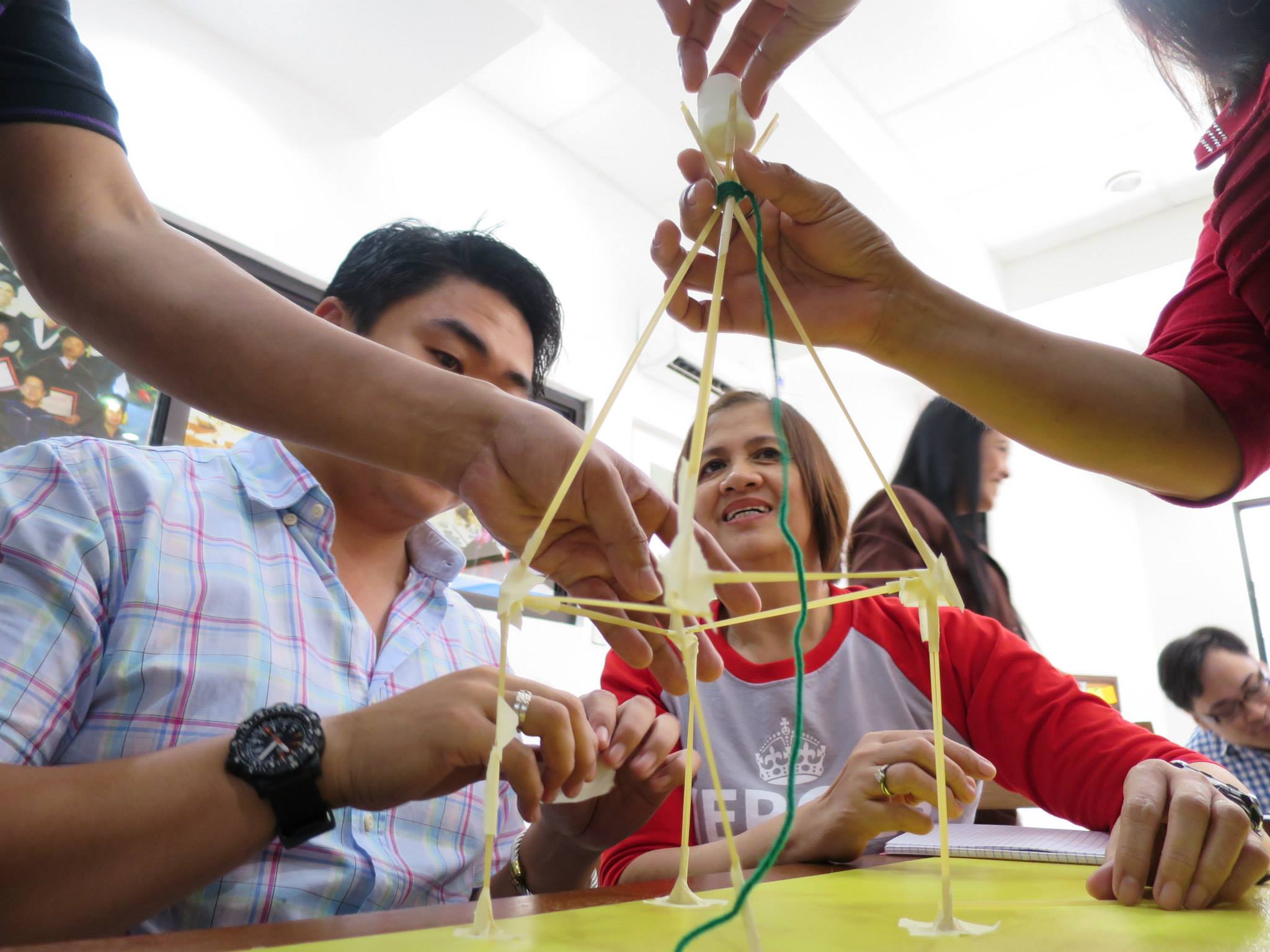 The first group drafted a system of monitoring guidelines and processes for teachers when applying new ideas. A committee composed of varying school personnel would be created to discuss, evaluate, test, and eventually implement these proposals. While it was well-received overall, the questions raised included how much the undertaking would cost, what the step by step process would be, how the members would be selected, and what checks and balances would be put in place. 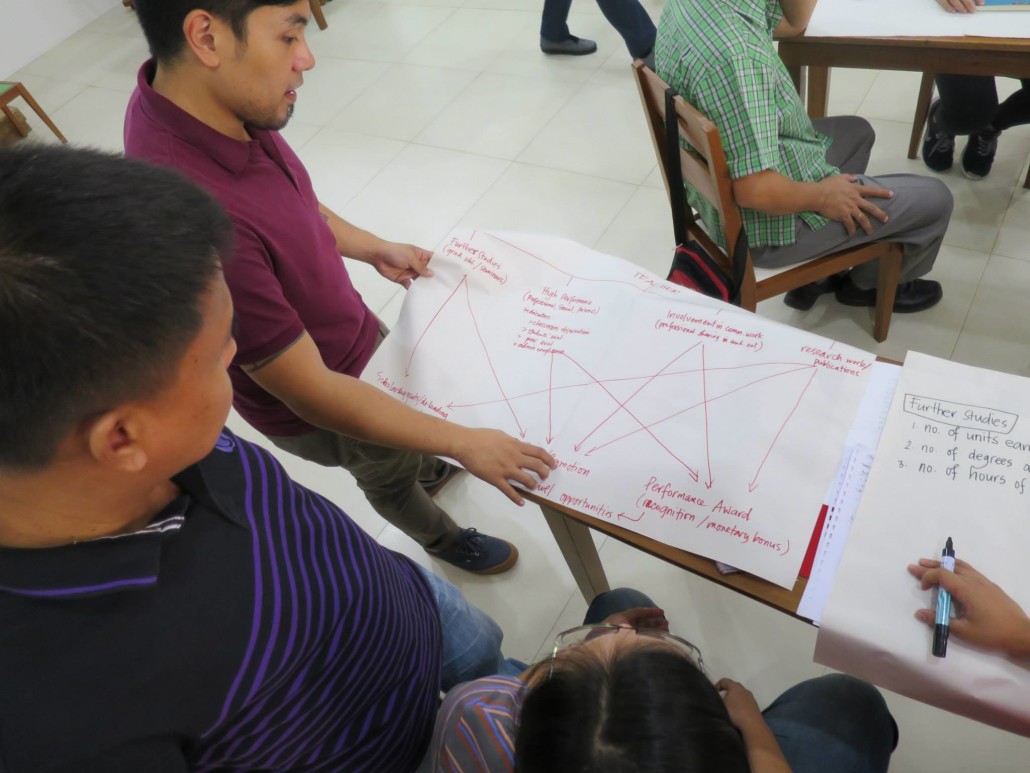 Two groups then tackled an incentive program for teachers who practice lifelong learning and innovation. One group devised a system in which a teacher’s number of degrees, highest level of education attainment, number of published works, and the like would result in rewards such as promotions and tenure. Concerns included how the group could address the issue of monetary difficulties as an obstacle to further studies, and whether the program promoted individualism rather than genuine lifelong learning. In addition, one caveat raised by the group was that, because it’s dangerous to quantify learning but also difficult to qualify it, such incentives must also be monitored along with teachers’ job performance. An educated teacher doesn’t necessarily make an effective instructor.

The other group, on the other hand, came up with a casual kapihan meeting meant to encourage information gathering from teachers, especially those who may not feel comfortable raising concerns in a formal setting. The questions included what the exact agenda of the meeting would be, who would facilitate and attend, and whether there was a danger of it turning into a repository for negative but not necessarily productive feelings. 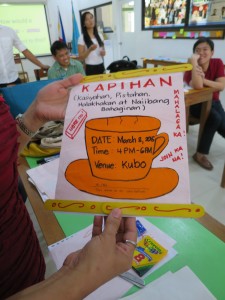 Prototype poster for an event idea

Wrapping up the workshop, the last group came up with the idea for an app that would work as a supplement to classroom learning. It was intended to address the topic of an alternative learning tool for teachers that fits in with the culture of the school. Concerns centered on accessibility and socioeconomic status (can everyone afford a smartphone?), and how it would be supplementary to, rather than repetitive of, classroom lessons. 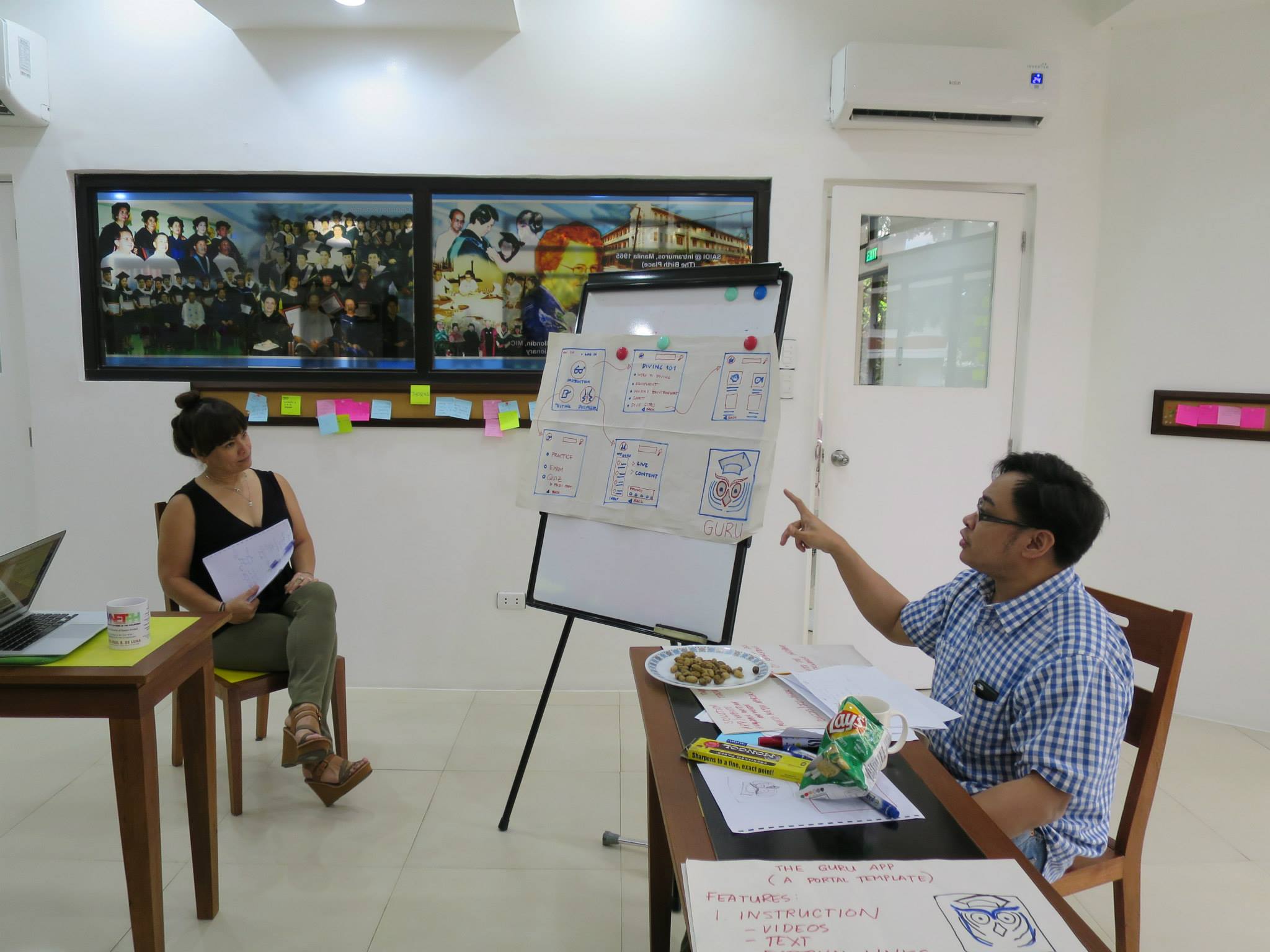 With there is no shortage of creative and well-meaning ideas in the field of education, it’s easy to be bogged down by the power struggle between practical administrators and idealistic teachers, ambitious ideas and budgetary constraints. That said, it is precisely in this environment that deeper learning and design thinking can come into play, operating as a strategic attempt to work from the ground up rather than the top down.