Ashoka is a global network connecting leaders and social entrepreneurs with the purpose of seeking solutions for the world’s pressing social problems. One of their projects is the ChangemakerXChange (CXC), a global collaboration platform for young social innovators. This year’s iteration had the theme Reimagining Education, and was held in the Philippines with a public event at Hive Hotel last September 5. As Gerson is an Ashoka ChangemakerXChange alumnus who was part of the summit 2 years ago, it seemed only natural for Habi to have been invited to lead the occasion. For this workshop, our goal was to describe how schools might be designed to nurture a new generation of changemakers. 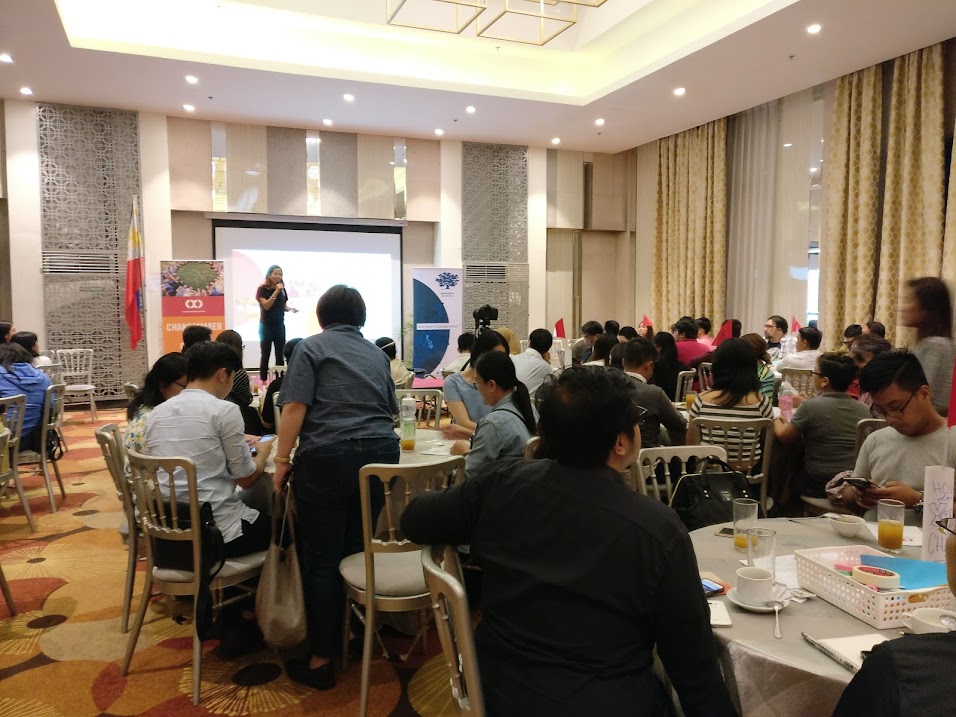 More than 25 changemakers and 50 guests from various sectors attended the event.

The event was supposed to start at 6:30 PM, but because people were enjoying casual conversations over dinner, we were only able to do so around 40 minutes later. We couldn’t blame them though–who wouldn’t enjoy mingling with changemakers and Ashoka fellows from across the globe and 50 other people coming from different sectors in the country? Just imagine the energy and synergy in that room! By 7:10 PM, CXC commenced with the 25 Changemakers giving their pitches to present their projects and advocacies. 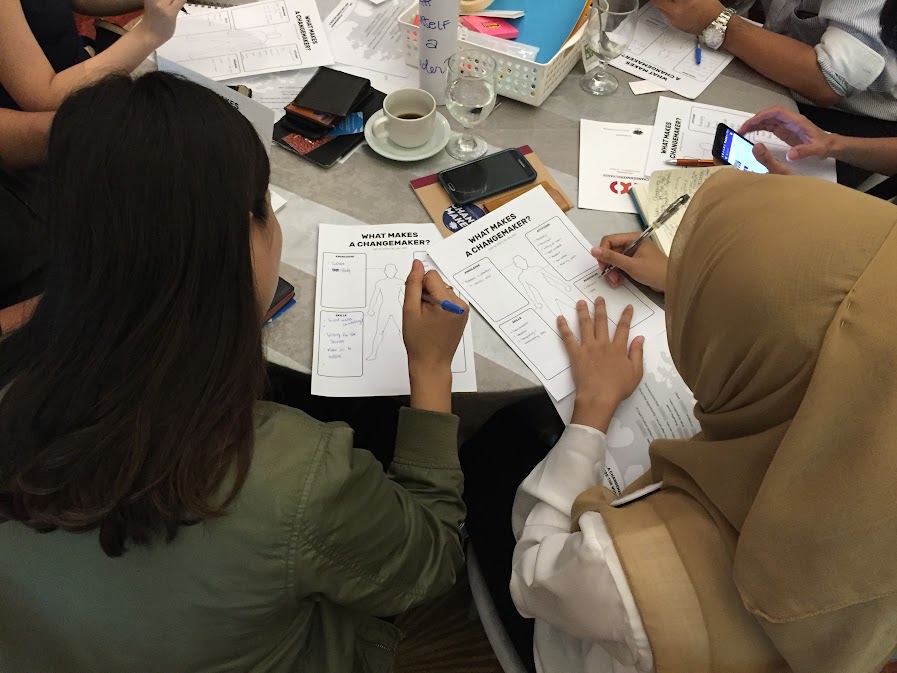 Participants identified what knowledge, attitudes, skills, and resources they think are necessary to become a Changemaker through an avatar.

After two rounds of pitches, we facilitated a session of Ink, Pair, Share wherein we asked the participants to illustrate their concept of a changemaker through their very own Changemaker Avatar. Participants identified what knowledge, attitudes, skills, and resources they think are necessary and helpful for someone to become a Changemaker. To exchange ideas, we asked them to roam around the room, pair up with someone they do not know, and discuss what their avatars were like. This went on for several rounds, and each round, a new voice and perspective was heard by the participants. 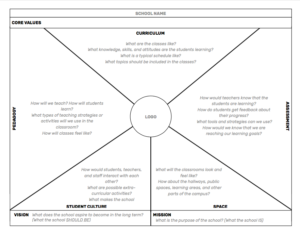 After having established the concept of a Changemaker, the next part of the event focused on assuming the role of school designers. Staying true to the essence of the workshop, we divided the participants into groups and asked them to brainstorm an ideal Changemaker school with the aid of the School Design Template. This tool shows the different “ingredients” that make up a school (i.e., core values, vision, mission, pedagogy, curriculum, assessment, student culture, and space), together with prompts to help them facilitate their brainstorming session. 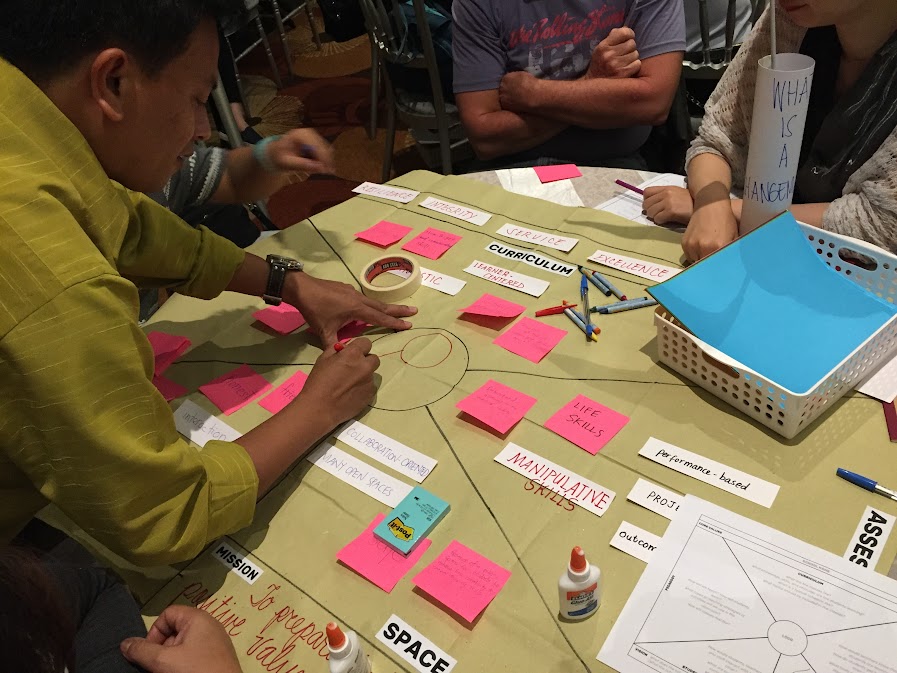 School Design Template. Fill it with Post-its and cards… 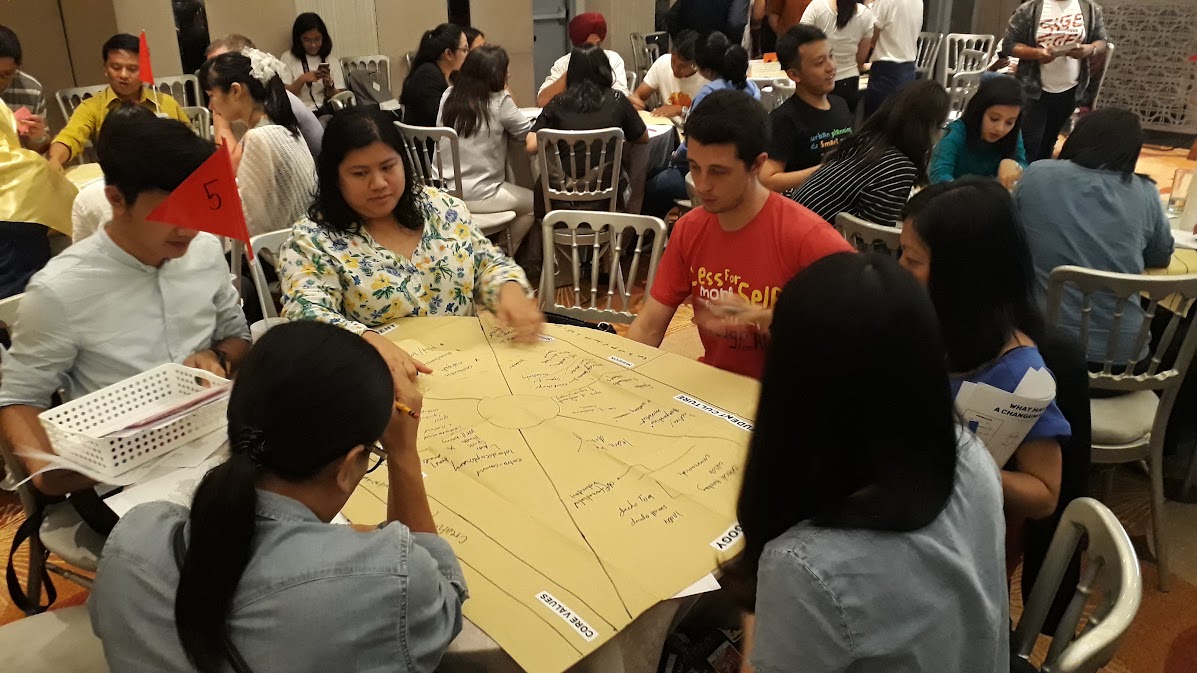 …or let everyone write on it!

It was especially helpful for participants coming from non-education sectors as it gave them a new lens to use when it comes to looking at schools. A giant version of the School Design Template was also provided for each group, which by the end of the brainstorming was filled with Post-its, meta cards, and straight up ink notes.

The evening did not just end with mere ideas; we had to make something tangible out of it. And what better way is there to showcase a school than to hold an Open House for everyone to experience. Based on their School Design Templates, the groups crafted an Open House prototype by holding role playing skits, giving presentations, telling stories, and even creating mascots, among others.

It was definitely an interesting evening going through each booth and experiencing what each school has to offer. Similar themes were observed across all schools, which shows that there is a general idea among the participants what the essentials are to nurture Changemakers. Nevertheless, novelties were also present which gave each school a unique selling proposition. 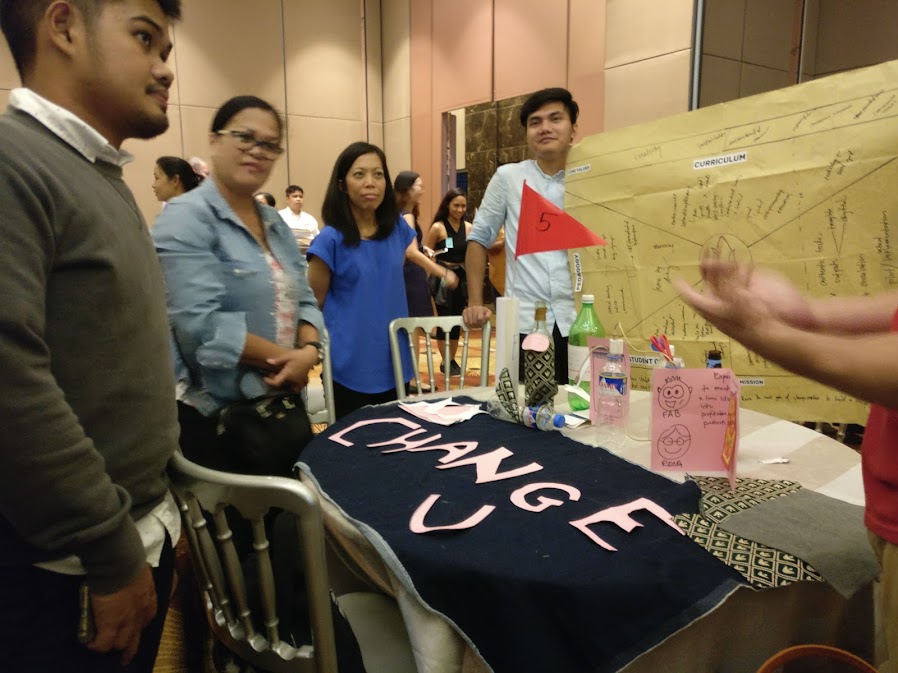 After almost three hours of being together, we had a check-out in true Habi fashion. CXC concluded with smiles on everyone’s faces, fresh ideas in each person’s mind, and new contacts on every phone and social media.

In 2020, we worked on a project with Buri Technologies to design an online gender sensitivity and gender-fair language course for the Department of…